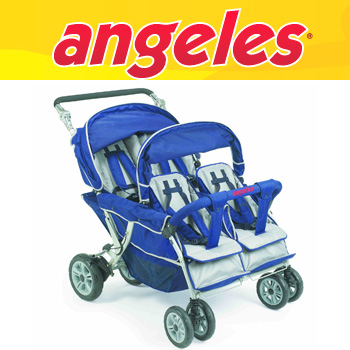 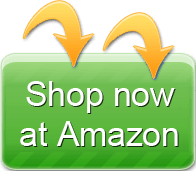 Do you have three kids with a fourth option in your future? Then you may want to give the Angeles SureStop Folding Commercial Bye-Bye 4-Passenger Tandem Stroller a look to see if it’s a good fit for you and yours.

According to a sign sewn into the stroller, this isn’t for infants. 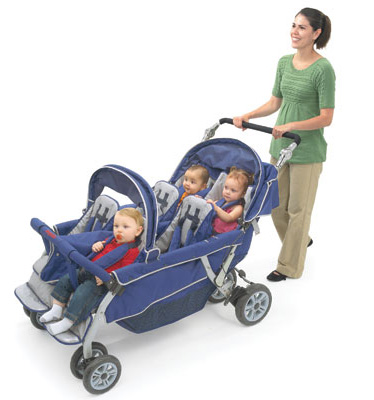 You’ve got everyone facing the same direction in two rows of two seats. Since it has room for four, it’ll be a little heavier than some of our other options and you may have some difficulty getting it in and out of doors.

It’s got a great braking system that will stop this stroller on a dime. However, you’ll need a little extra oomph to depress the handle and keep it pushed down so the brakes don’t engage while you’re out for a walk.

This is a very common stroller for big families and daycares. Most of the reviewers online and in stores tend to have services, though families also find it to be a great stroller for four little ones. 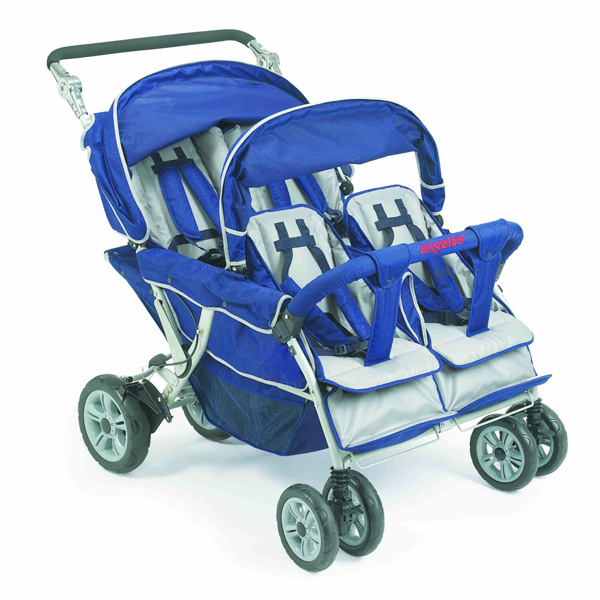 Many people report that it’s wide but it still fits through the front door, so you’re not going to run into trouble with the standard doorway as you go about your day. Since it seats four, expect it to be a little bigger and heavier than the average stroller on our list.

The company hasn’t published official numbers on how small it gets when it is collapsed, but it looks to keep the same width and length while losing about two-thirds of its height. 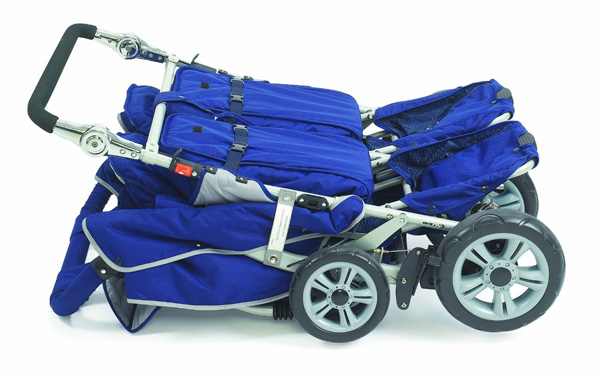 It has great positioning for the babies. You can recline or sit them straight up and it isn’t awkward. It gives everyone a good amount of space, whether you’re pushing three or four. 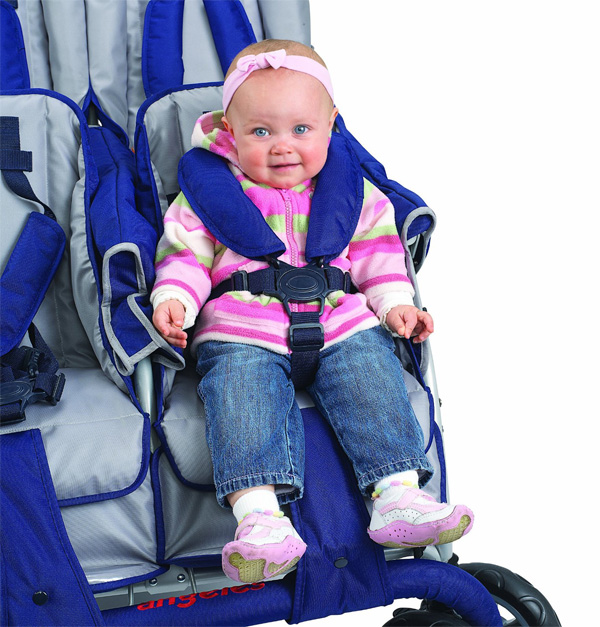 Users do note that it’s heavy and a bit hard to move when collapsed, but unfortunately that goes with the territory because of the size it supports. The heft is also present in the brakes, which some users said they’ve had to use a strap to keep the brake disengaged. Unfortunately that’s pretty dangerous and shouldn’t be tried by anyone. 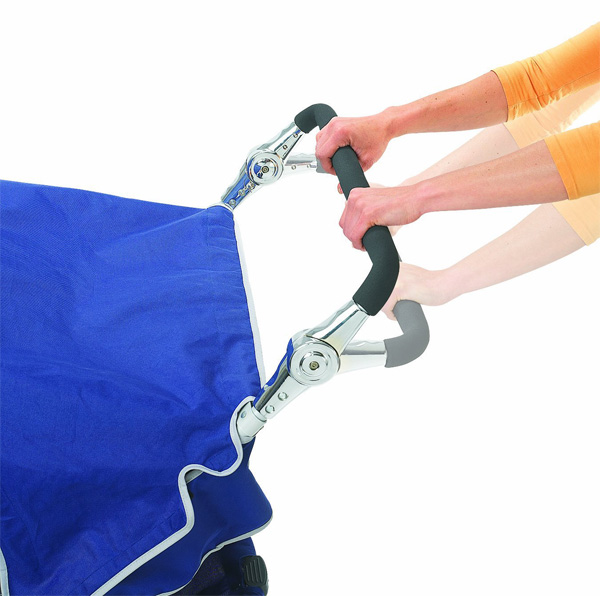 The brake system is multi-tier and some users like it while others aren’t a big fan. The braking is: 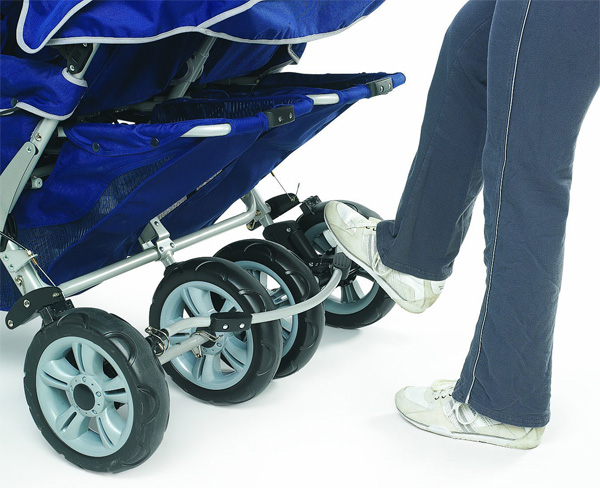 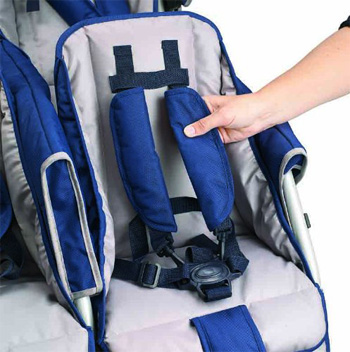 Once it’s put together, most users say it is simple and easy to use. The seats can move from laid back to upright very quickly, but it’s not something the kids can change themselves. 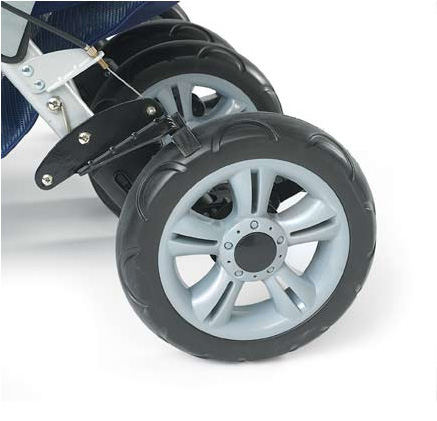 The tires are large and can move over rough terrain with ease.

It offers a large storage option that some users say is easy to get to. You may need a small bag to make a few things easier to reach, but overall it seems to give you enough space that you’ll need.

The $350 stroller has a lot of great reviews, so if you’re in need of the bulk it’s among the best we’ve come across.

Angeles doesn’t list many accessories on its website, just part replacements and new seats for its larger strollers. Some users have found cup holders and small pockets for keys, but most have noted that they don’t need extra storage.

How do I know if this stroller best for me?

This is the perfect stroller if you need to move around three or four kids, but are okay to carry any infant you’ve got. The only draw backs to this stroller are that it’s heavy and not designed for infants.

It reclines well and has a very sturdy harness that seems to keep everyone safe and secure.

For people who run daycares, this is among the most-reviewed and best rated products around. They like the ability to go through most doors and lock everyone in facing the same direction.

Just make sure you have a hand lifting its 77 lbs. if you’ve got a high car or if that amount of weight is tough for you. You’ll have to put it together, but most say the assembly is quick and easy.

“Can infants use this stroller? What about an infant seat?”

The stroller is not designed for infants, so the best answer is no. Some people have reported that they’ve used infant car seats with some success, but there’s no built-in support so this is a risk you’re taking.

“Does it fit in a minivan?”

It can fit in many large trucks and mini vans, but it’ll end up taking most of the room you have in back. You’ll need to make sure you can lift it and load it into the van on your own, or have a team to help with the stroller when you take trips.

“How far do the strollers recline?”

Seats recline to roughly 45 degrees and so it’s comfortable enough for kids to use for a long ride.

Some users say it wobbles if the load is unbalanced. Because of the way weight is distributed in these types of strollers, you should load it front-heavy first. Having weight up front will help keep wheels from wobbling, even if you’re just toting three kiddos.

“Is the front bar permanent?”

The stroller has a built-in front bar that is high and can help keep older kids stable. For those with younger kids, you may want to put them in back seats since there’s not much room for an infant bar.

About the Stroller Company

Angeles founder Claude Tindell founded the company in 1958 when began selling tricycles.  Angeles has developed an extensive testing regime for its products to ensure that safety, durability and play value are met.

The company operates a large set of sellers and distributors. Through this network and its own sales, Angeles says that its Bye-Bye line are the top sellers for multi-seat buggies for daycare and other childcare centers.

This is a great stroller if you need something to push around many kids. If you’re looking for carrying around three or four, it’s a really good stroller for you.

The main drawback is its weight. If you can handle the weight and have space in a large vehicle (which you probably do if you’re filling all four seats), then you’ll this might be the best option for you today.

Note: We don’t actually sell any strollers here at BestTripleStrollers.com; we just review and evaluate them. However, we do look for the best dealers and prices on the internet.

Wrriten by: Geoff Whiting.
Geoff Whiting is a writer and product reviewer who has specialized in technology, consumer electronics and home product reports since 2007. He has written for national magazines like "American Shipper" and "BIC Magazine," as well as product reports for Intel and Spotify.
User Reviews